Electrophysiological and Anatomical Studies of the Neostriatum

The neostriatum, or striatum for short, is the largest of the basal ganglia nuclei, and the principal input structure.  90-95% of striatal neurons in rodents are GABAergic spiny projection neurons (SPNs).  The use of transgenic mice that express fluorescent reporter proteins like EGFP or cell-specific Cre recombinase has allowed us to visualize specific interneuronal subtypes expressing, for example, parvalbumin (PV), tyrosine hydroxylase (TH), neuropeptide Y (NPY), and a host of others that currently lack immunocytochemical markers but are none-the-less physiologically and/or morphologically distinct subtypes of GABAergic interneurons in the living slice, and target them for whole cell recording and study of their intrinsic properties and synaptic connections.

Using in vivo adeno-associated or lentiviral transduction in vivo in transgenic mice expressing Cre recombinase under the control of specific promotors, one can get expression of opsins tha, in response to light of specific wavelengths, activate excitatory ion channels (e.g., channelrhodopsin2 (ChR2) or ion pumps leading the inibition of spiking (e.g., halorhodopsin (NpHR3)) in specific neuronal subtypes, for example, in sustantia nigra or VTA dopaminergic neurons, striatal cholinergic or GABAergic interneuron subtypes or SPNs. By illuminating transduced neurons or their axons in brain slices with blue light from a laser or LED, we can activate those neurons expressing ChR2 selectively, something that is impossible with conventional techniques. Transduction with NpHR3 and illumination with yellow light similarly activates a Cl- pump and hyperpolarizes and silences a neuron. A related technique is to use Cre-dependent neurotoxins or DREADDS, Designer-Receptors Exclusively Activated by Designer Drugs for longer term, optically mediated control of neuronal activity.  We use these techniques in combination with ex vivo recording to analyze basal ganglia circuitry and network properties.

Excitatory Afferents and the Striatal Microcircuitry

Using a combination of these various techniques, it has become clear that there is tremendous specificity in the intrastriatal connectivity of the various interneurons with each other and with SPNs.  Moreover, we now know that the even among the oldest and best known inputs to the striatum, those from many regions of cortex and thalamus, there is a high degree of cell type target selectivity within the striatum.  On top of this, the intrastriatal interneuronal microcircuitry modulates cortical and thalamic excitatory inputs, resulting in a wide variety of both excitatory and inhibitory effects on SPNs with varying timescales.

Finally recent studies from our lab and others have demonstrated that in addition to the cortex and thalamus, at least two other sources of glutamatergic input to striatum exist, one arising from the pedunculopontine nucleus and the other from the subthalamic nucleus.  Both of these display striking target specificity, avoiding the SPNs entirely and synapsing only on different populations of GABAergic and cholinergic interneurons. 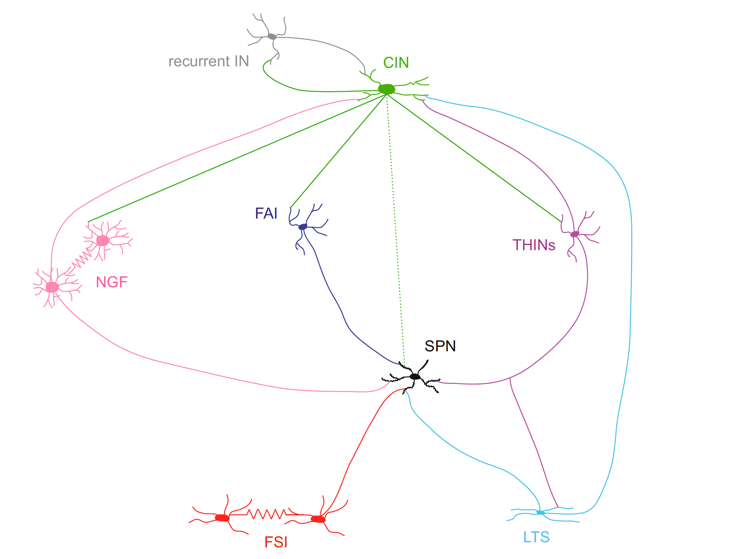 The complexity and selectivity of the intrastriatal circuits  connecting SPNs and

interneurons, many of which have only have been recently discovered. The dotted line linking CINs and SPNs represent muscarinic neuromodulation while the solid lines emanating from the CIN indicate nicotinic synapses.  From Assous and Tepper (2018) European Journal of Neuroscience, doi:10.1111/ejn.13881.